Used properly, a portable fire extinguisher can save lives and property by putting out a small fire or containing it until the fire department arrives. Portable extinguishers for home use, however, are not designed to fight large or spreading fires. Even against small fires, they are useful only under certain conditions.

CLASS A FIRE
Ordinary combustibles such as wood, cloth, and paper.

CLASS B FIRE
Flammable liquids such as gasoline, oil, and oil-based paint.

The extinguisher you choose must be appropriate for the type of fire being fought. Multipurpose fire extinguishers, labeled ABC, may be used on all 3 classes of fire. Using the wrong type of extinguisher could endanger your safety and make the fire worse; for example, an extinguisher used to put out a grease fire on the stove could spread the fire outside of the frying pan rather than putting it out.

Portable extinguishers are also rated for the size of fire they can handle. This rating will appear on the label -- for example, 2A:10B:C. The larger the numbers, the larger the fire that the extinguisher can put out. Keep in mind that higher-rated models are often heavier. It is most important that you be able to properly hold and operate the extinguisher.

Extinguishers should be installed in plain view, above the reach of children, near an escape route, and away from stoves and heating appliances. Extinguishers require routine care; read your operator's manual to learn how to inspect your extinguisher. Follow manufacturer's instructions for maintenance. Rechargeable models must be serviced after every use. (Service companies are listed in the Yellow Pages under "Fire Extinguishers.") Disposable fire extinguishers can be used only once and must be replaced after use.

Keep your back to an unobstructed exit and stand 6 to 8 feet away from the fire. Follow the four-step Pull, Aim, Squeeze, and Sweep (PASS) procedure.

PULL THE PIN: This unlocks the operating lever and allows you to discharge the extinguisher. Some extinguishers may have other lever-release mechanisms

AIM LOW: Point the extinguisher nozzle (or hose) at the base of the fire.

SQUEEZE: The lever above the handle: This discharges the extinguishing agent. Releasing the lever will stop the discharge. (Some extinguishers have a button instead of a lever.)

SWEEP: From side to side: Moving carefully toward the fire, keep the extinguisher aimed at the base of the fire and sweep back and forth until the flames appear to be out. Watch the fire area. If the fire re-ignites, repeat the process.
Always be sure the fire department inspects the fire site, even if you think you've extinguished the fire. 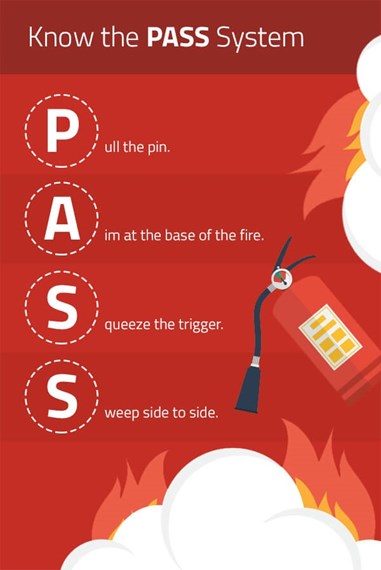 Should you fight the fire?

Before you begin to fight a fire, make sure that: